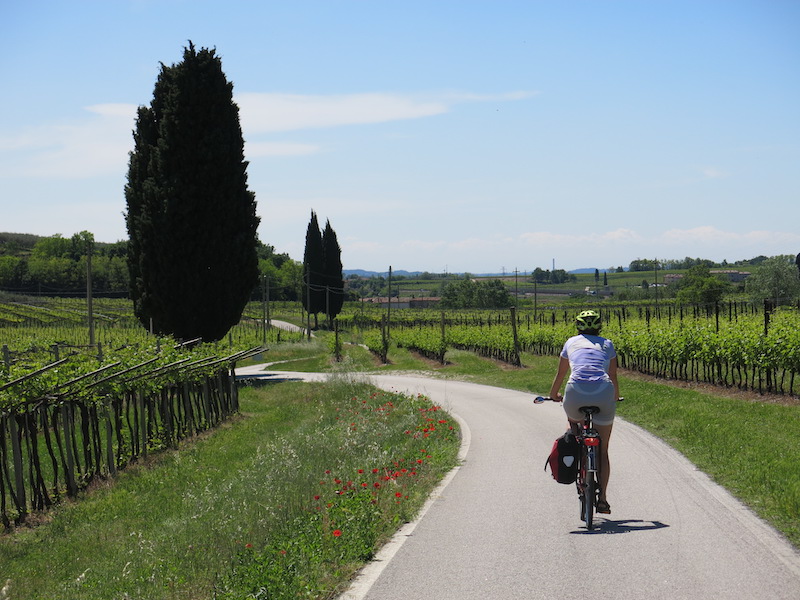 Looking for the best bike tours in Italy? Italy is a country full of surprises, especially for those who want to discover it by bike. Our country offers plenty of itineraries for those who love cycling and traveling at the same time. Cycle routes along Northern Italy most beautiful rivers are the best way to approach cycling tourism.

There are many bike paths around Verona and Lake Garda that run along Adige, Mincio and Brenta rivers: these flat routes are mostly carved out on towpaths or embankments, away from the main traffic roads. The scenery is always breathtaking: they cross charming towns and villages where you can find bike hotels and all the assistance needed for a cycling vacation.

A bike ride that runs through the heart of Trentino and Veneto Region, connecting the cities of Bolzano and Verona. Adige Valley is the longest and seamless bike path (from Passo Resia to Verona: almost 300 km!) which is integral part of the Italian Sun Route or EuroVelo 7 related to the European Bike Network.

Starting from Bolzano, the route goes down to Trento, Rovereto and Verona. The countryside bordering the bike path is dotted with vineyards and apple orchards, which bloom in springtime.

Along the route, cycle enthusiasts will find different alternative paths. After the city of Bolzano they can make a detour to reach the mountain bike trail that connects Adige Valley to the Dolomites of Fiemme and Fassa. In Trento you can go East and reach Bassano through the Valsugana: another beautiful and safe bike path among the mountains.

Or from Rovereto they can reach Lake Garda and skirt it, from Torbole onwards on the eastern shore.

If you follow the river Adige, the road is mostly, the total difference in height does not reach one hundred meters, making it a perfect route for those who enjoy charming landscapes and an effortless ride dotted with cultural and historical sights. Along the way bike travelers can also stop to dedicated “bicigrill”, i.e. restaurants and bars where to take a break and taste local products! 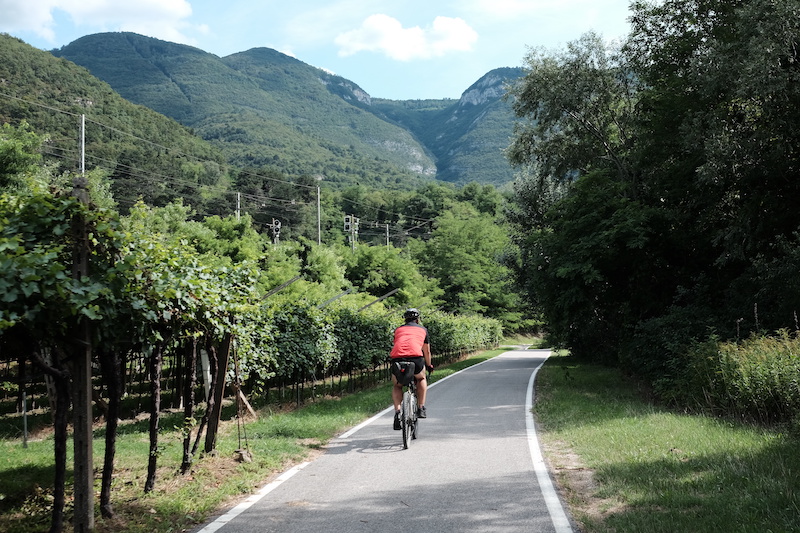 The cycle path along the river Mincio is one of the most beautiful countryside roads in Northern Italy. It is suitable for people of all ages, since it has a very modest difference in height, especially for families and those who love the outdoors!

The Mincio cycle path starts in Peschiera del Garda. The path runs along the Mincio river for almost the entire route, especially when crossing the morainic hills.

The Mincio cycle path connects Peschiera and Lake Garda to the city of Mantua. For almost 50 km, the route between Lake Garda and Mantua, a UNESCO World Heritage city, crosses the historical Venetian and Lombard lands, among charming villages and vineyards of Custoza and Lugana DOC.

The morainic hills are a real paradise for birdwatchers, and not only. The area of the morainic hills was the theatre of many historical events such as the battles of Solferino and San Martino which were crucial for the Risorgimento period and the Italian Independence in 1861.

– From May 2022 we have activated the shuttle service to connect Mantova and Peschiera! –

After traveling along the Valsugana bike path from Lake Caldonazzo to Bassano del Grappa, travelers can go along the Brenta River to continue their journey to the Venice Lagoon.

This bike itinerary in the lands of the Brenta river is very engaging, and travelers will plunge amidst the lush nature and history, art and architecture landmarks.

The canal starts in Venice and connects the Venetian area to the Paduan area. The Venetian aristocracy used to travel along it to reach the Palladian villas (also known as Venetian villas), sumptuous residences built between the 16th and 18th centuries, which date back to the master Renaissance architect Andrea Palladio.

The Brenta Riviera has always been perceived by the Venetians as the ideal extension of the Grand Canal. Three dams, bridges and 33 km of canals flanked by breathtaking villas form a route rich in culture, history, nature, recognized in 1994 as a UNESCO World Heritage Site.

| Keep reading: 5 steps to design the best cycling holidays in Italy around Verona and Lake Garda |