Padova > Monselice (1/2) Along rivers and channels, to the Euganean Hills 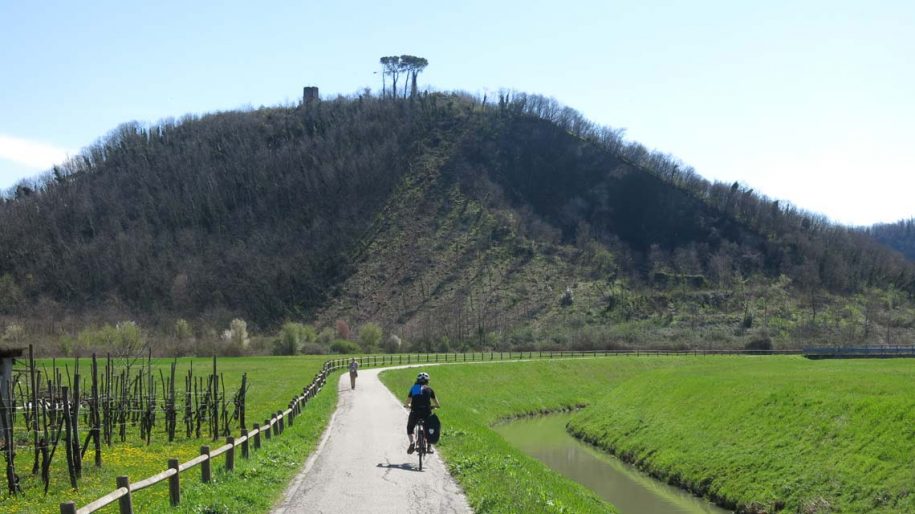 50 km in the countryside

In Italy we say: Christmas with your folks, Easter with whom you want. And on Easter Day, my girlfriend and me decided to go cycling! We decided to cycle around the hills of Padua and Vicenza, an area rich of Venetian Villas and nice bike paths.

The last drops of rain fell during our arrival in Padua, but we were lucky: the next two days were amazing. Nobody was around during Easter Day morning and cycling on the small alleys in the city centre was really pleasant, among elegant Venetian-style buildings and majestic churches. We went out the city and we reached the countryside following the Bacchiglione river, on the nice bike path built on its banks: the day was really clear, so clear that we could even see the Alps!

After cycling on Bacchilgione river banks, we started to follow small canals that leaded us to the Euganean Hills, lush green hills that once were volcanos. At the foot of the hills there is a long and safe bike path that goes around the hills and passes through some of the best attraction of the region: the first one we saw was Praglia Abbey, an ancient Benedictine monastery famous for its four cloisters: unfortunately they were closed for Easter prays, but the spices shop wasn’t, so we settled for the delicious herbal teas produced by the monks.

With a small detour among the hills we reached Villa dei Vescovi, a renaissance gem built on the top of a little hill from where one can enjoy a great view over the hills. We didn’t want to miss anything, and after the interesting guided visit of the villa, we relaxed on the large meadow facing the Villa vineyards, perfect location for a picnic!

Leaving behind this little paradise was hard, but we the trip had to go on, so we started to cycle again on the bike path, that here follows a canal in the green plains at the foot of the hills. We first flanked Abano Terme and then we got to Battaglia Terme, where we stopped again for the visit of Catajo Castle. It’s more then a castle, it’s a majestic Villa built by the Obizzi family during XVI century for impressing the visitors, normally kings and princess that contracted their powerful mercenary army. The Villa is still really impressing, from the lush garden to the marvelous frescos in the many rooms inside the villa, and the beautiful view from the large terrace.

Just a few kilometers away from the Catajo Castle, the elegant Valsanzibio Garden is another must-see of this itinerary: we reached it while the late afternoon sun painted the sky and the hills with warm colors. The garden was even more magical with those colors, here the nature – shaped by the man – surprised us, with secular trees, huge hedges, shooting fountains and a large and funny labyrinth.
After the visit of the garden, we just cycled for a few kilometers more on the bike path and we finally reached the village of Monselice, final destination of the day. Our day ended up here, among the medieval allays of the village born under the shade of the hills: we couldn’t choose a better place where to rest!