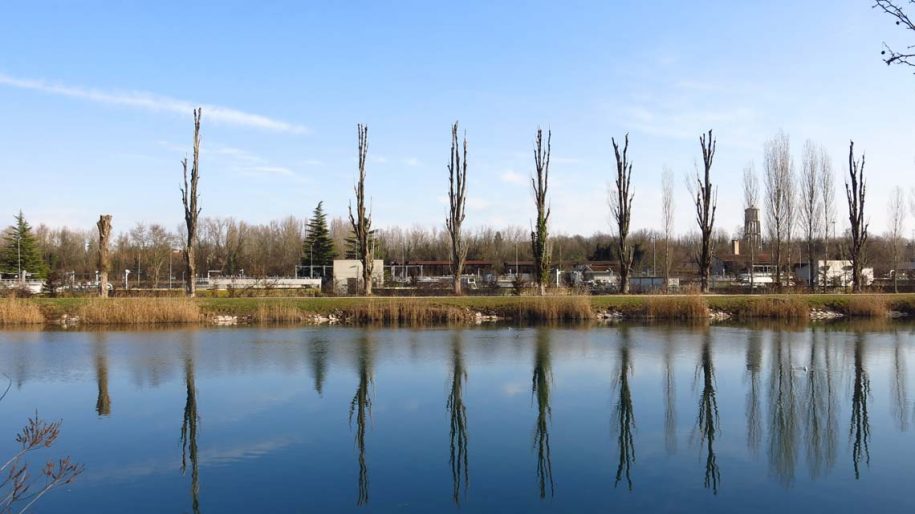 The River Mincio bike path is a classic for any bike lover, perfect for an easy Sunday excursion. On the first sunny winter day, we decided to grab our bikes, then we took the train from Verona and we reached Peschiera del Garda in just 15 minutes.

The River Mincio bike path starts close to the city centre of Peschiera del Garda and we reached it passing through the gates of the majestic Venetian walls surrounding the town: Peschiera del Garda has been recently listed as a UNESCO heritage site thanks to those walls, that are actually quite impressive. Peschiera was unusually not crowded, so before cycling on the bike path we enjoyed the little streets of the centre and the port, facing the shining Lake Garda.

We left the city walls on the back and we started cycling along the River Mincio, that flowed calm to the south. The bike path, that was built on the old railway that linked Peschiera to Mantova, is normally really crowded, but in this winter day we just saw a few people on the way: winter time is not always a bad thing!

Cycling among the moraine hills, we first passed near Monzambano, overlooked by a big castle, then we got to Borghetto sul Mincio, a romantic village with many water mills, that stands between a old medieval bridge and the hills of Valeggio, which castle dominates the area: this is the perfect place where to take a little rest and to share some bread with the many funny ducks of the river.

We left the River Mincio bike path after Borgetto and we followed another bike path towards Volta Mantovana. This is a land of castles and palaces: in Volta Mantovana we found a beautiful palace built by the Gonzaga family and there we had a rest, just in front of its beautiful garden, enjoying the view with a nice glass of wine of the local winery.

After the break we followed small secondary roads towards Peschiera del Garda, going up and down on small hills; the countryside landscape is here interrupted only by the towers of Mozambano and Ponti Sul Mincio’s castles.

Once back to Peschiera, we just had the time to have a look to the beautiful Lake Garda and finally we took the train again, back to our lovely Verona.

I suggest this easy day trip to everybody: the first section – from Peschiera to Borghetto – is a perfect excursion for families with children, for those who are more trained I suggest the whole loop.