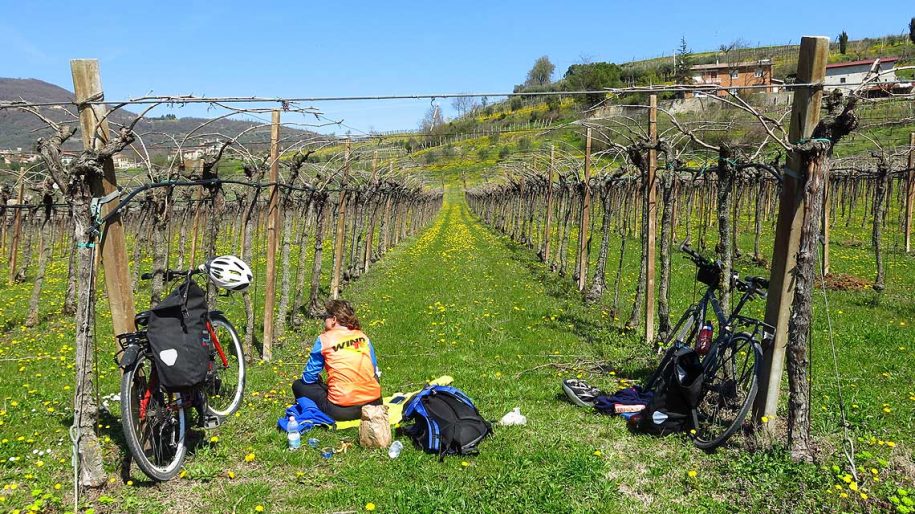 Under a clear sky until La Rotonda and Vicenza

Second day by bike, among the Venetian Villas in Vicenza and Padua countryside. We were already active in the first hours of the morning: before starting cycling we decided to walk up to the hill behind Monselice, until the elegant Villa Duodo, from where we enjoyed a beautiful panorama over the Euganean hills.

Clear sky and chilly breeze on the hill, while down in the village the local market was already full of life: a large breakfast in the market was unmissable! On the first kilometers of the day we cycled along the winding Bisatto Canal, that leaded us until the medieval town of Este: overlooked by a big castle and surrounded by high walls, the town also features beautiful colorful houses in Venetian style facing the large main square.

We left Este at our back, we headed north and finally we started to see the Berici Hills: that means that Vicenza is not so far! We left the Euganean Hills bike path and we began cycling on the Riviera Berica bike path: unfortunately, it’s not as beautiful as the previous one, even if its surface is perfect it’s pretty boring, as it’s a really long straight road in the middle of the countryside: some wind from the northern mountains also made the pedaling quite challenging.

About 10 kilometers on the bike paths were enough for us and once we got closed to the Berici Hills we left it and we followed the beautiful country road that flanks the hills. The road goes slightly up and down and it passes through large vineyards, orchards and meadows spotted with yellow flowers and little villages, such as Mossano (featuring many ancient water mills), Nanto, Castagnero and Lumignano, overlooked by high cliffs.

The most surprising one was Costozza, as on its main road we saw five Venetian Villas: we saw many on the way, but five villas in such a small village was a big surprise!
In Longare we met again with the bike path and we followed it until the famous Villa Capra, aka La Rotonda, a masterpiece by Palladio, the most famous architect of the Venetian Republic. It’s a unique villa, with it’s elegant neoclassical shape on the top of a small hill. The visit of the Villa is a must-to-do, for us and for other hundreds of visitors: even if the Villa was really crowded, we enjoyed it a lot. From “La Rotonda” to Vicenza there are just a few kilometers on a quiete bike path, that leaded us to the city centre. The city itself would deserve a full day visit, but we had enough for the day.

We really enjoyed the two days by bike, the safe bike paths and the majestic villas: we look forward to cycling in this area again!