Villa Arvedi and Valpantena Valley By bike, only some km away from the city center 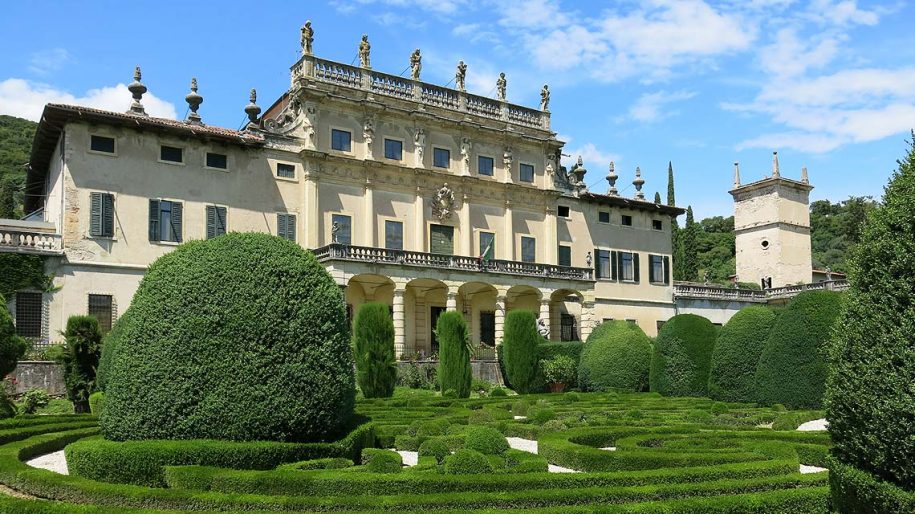 Set of Letters to Juliet, the elegant Villa Arvedi has a great location on the valley

Valpantena is one of the valleys on which Verona streches. Its name comes from Pantheo, Roman temple in Santa Maria in Stelle, a village in the valley, or the word pantano: mud. Populated already in anciet times, it has been rural area but with noble villas too. After the French Revolution, the family Allegri gains a lot of political and economical power, and appropriates many lands around its Villa: Villa Allegri.

The Villa was build in 1200 between Grezzana and Marzana by the important Della Scala family. When Allegri family looses its prestige and power, Giovanni Antonio Arvedi buys the Villa, which became Villa Arvedi.

On the side of a hill, protected by a wood, the Villa has a beutiful position on Valpantena.The facade is adorned by a colonnade, a big terrasse, statues; in front of it, a wide Italian Garden, with geometrical Baroque lines of hedge. On the right of the garden: the grotto; behinde the Villa: San Carlo Borromeo chapel. In the Villa the rooms of Cesari and Titani are adorned with frescos, wooden ceilings, paintings.

Today the Villa is partially the private residence of the owners and partially open to the public. It is still a farm and you can buy extra virgin oil right there.

By bike from Verona you can reach the Villa quite easily. Once out of the city center, you could bedal on progno, the dirty road of the side of the dry creek in the middle of the valley. But we decide to bike on an asphalt secondary road, still among vineyards on bright yellow fields: dandelion in spring time.

The last part of the itinerary before arriving to Villa Arvedi, we bike on a bike path. From there, we can enjoy the Villa getting closer, its tall cypresses, the nicely cut hedges, the wide lawns until the facade. The atmosphere is like the old times, walking in the halls, you can imagine stories of nobile families and intrigues.

Once out, I almost forgot that I arrived by bike, not by carriage.