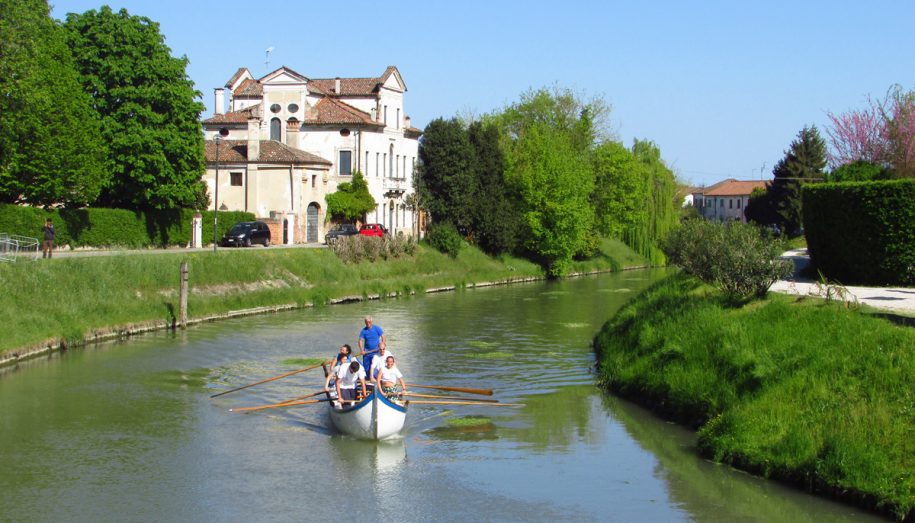 From Villa to Villa, two days by bike in the provinces of Padua, Venice and Treviso

In the Veneto region there are plenty of villas: more than 5.000, according to the Venetian Villas Institute. We choose to visit them slowly, by bike, among the tranquillity of safe bike paths and the opulence of the palaces.

Our trip starts off in Padua, a bike-friendly and elegant city. After a short visit to the characteristic markets in the central piazzas and in Saint Antony Church, we start to cycle on a bike path along the river Piovego, on whose banks some villas were built: the most impressive one is Villa Giovannelli Colonna. Then, the river Piovego meets with the river Brenta in the village Stra, and here it’s an apotheosis of villas: Villa Foscarini Rossi, Villa Cappelo Gianni, Villa Barbariga and the biggest of them all, Villa Pisani.

It mirrors on the waters of the river Brenta, its splendid rooms bring us back in time, when the rich Venetian traders and doges used to organise great feasts and dances. The large park and the elegant stable are equally beautiful, as much as the green labyrinth.

We keep cycling on a gravel bike path that follow a small creek that crosses the Venetian countryside: it’s a good spot where to look at different kinds of birds, above all the beautiful herons. We get to the village of Mira, crossed by the Naviglio del Brenta, flanked by many other villas. We choose to visit Villa Valmarana, a small villa, completely different from the previous one, but still surprising thanks to its history and frescos.

Then, we cross the the village of Oriago and finally we get to Mestre, where we take the train to Treviso.

Treviso, kind of “small inland Venice”, is the perfect place where to charge the batteries and where to taste some local great food. The day after we dedicate the morning to the visit of the medieval city centre, crossed by many canals and the river Sile, and then we take the train, direction Castelfranco Veneto.

We leave the beautiful ancient village and its high walls behind and we follow a safe bike path that follows the Muson dei Sassi canal, that crosses the Treviso countryside, until we meet the Treviso – Ostiglia bike path. This bike path was built over the old railway that linked the two cities: now we have a beautiful shady road surrounded by trees, en exclusive road just for pedestrian and cyclists.

The bike path leads us to Piazzola su Brenta, a small village featuring one of the biggest Venetian Villas, Villa Contarini. The entrance to the villa is majestic, through an avenue flanked by magnolia trees, that bring us to the scenographic main square and its elegant colonnades that face the villa and its impressive iron gate. The rooms of the villa are sumptuous and luxurious, built in different styles in different ages, and the park is a relaxing oasis.

It’s difficult to leave all that magnificence behind, but it’s late afternoon and we have to catch the train back home.